Download a PDF of our Early Referral to Physical Therapy Newsletter!

A decade ago, Seattle was the site of a study into the benefit of early referral to physical therapy for the treatment of low back pain (LBP). A medical center, an insurer and a company partnered on the study, which found that patients could be seen sooner and return to work faster.

This new approach also lowered costs by more than 50 percent.

“Once the inefficiencies were mapped out on paper, the solution was clear to everyone … Put the physical therapy first,” according to a story in the Wall Street Journal.

Recent studies have reached similar conclusions, suggesting that sending patients to physical therapy earlier can reduce costs and the use of health care services without compromising outcomes.

More specifically, costs associated with increased physical therapy utilization can be vmore than offset by overall decreased medical utilization, such as referrals to specialists, imaging, opioids and injections/surgical interventions.

The Seattle study looked at dozens of spine patients and found there were no standard procedures for the courses of treatment. Patients often waited one month for an appointment.

By emphasizing physical therapy first, appointment wait times fell to one day, MRI use dropped by one-third within a year, and only 6 percent of patients lost time from work. From the old way to the new way, treatment cost fell by half.

In an 18-month follow-up period, early referral patients’ health care costs were an average of $2,736.23 lower than those for patients receiving delayed treatment.

The study (see research abstract on page 4) noted that primary care practice guidelines suggest deferring referral to physical therapy for several weeks. However, “about half” of patients actually receive physical therapy within two weeks, “which is a practice that may be justified by emerging evidence.”

A connection between early referral and positive outcomes could be that physical therapists promote “a greater sense of self-reliance in managing LBP” and confidence in a positive outcome, according to Dr. Julie M. Fritz, the study’s lead author.

“If a physical therapist’s treatment assists in developing self-efficacy, it is reasonable to expect it would have greater impact when implemented very early, before negative expectations have become reinforced and entrenched,” the author noted.

She contrasted that with alternate management strategies that “can foster a sense of dependency in the patient, such as use of MRI or opioids.”

That the early referral research has focused on LBP is not mere coincidence, given that it accounts for a relatively high 2.5 to 3 percent of physician visits in the United States, according to the 2012 study. It is an $85 billion direct hit to healthcare costs, up 65 percent from 1997.

A report in the Journal of Orthopaedic & Sports Physical Therapy looked at 14 studies comparing early vs. delayed referral to physical therapy for patients suffering from musculoskeletal pain. Most of the studies focused on LBP.

Although it called for more high-quality research on this subject, the report didn’t equivocate in noting that health care costs for managing LBP and other musculoskeletal disorders are rising annually without comparable improvement in patient-reported outcomes.

“From a public health policy standpoint,” according to the report, “it is imperative to investigate more clinically effective and cost-effective methods to care for patients with musculoskeletal disorders.”

Five of the studies reported on function and disability among occupational health/workers’ compensation patients. The studies “found less indemnity [insurance use] and sick leave and improved ability to lift and carry with early initiation of physical therapy.”

“The current available evidence, although limited in quality, indicates an advantage, primarily in decreased health care costs, associated with early initiation of physical therapy for spinal pain,” the report noted.

PHYSICAL THERAPY WITHOUT A PRESCRIPTION

There’s another factor that could encourage early physical therapy treatment: an expansion of “direct access,” which allows patients to seek some level of treatment from a licensed physical therapist without a prescription or referral from a physician.

Although direct access dates to the 1950s, physical therapy groups note that the majority of consumers don’t know that they can go to a physical therapist without a doctor’s prescription.

All 50 states, the District of Columbia and the U.S. Virgin Islands allow some level of direct access. However, only 18 states have unrestricted access.

For the other 32 states, there are restrictions that typically take the form of time and visit limits, previous diagnosis requirements, limited patient populations, or requiring referral for certain types of treatment.

Because rules vary by state, it’s best to ask your local Drayer outpatient center regarding direct access where you live.

The patient was a 42-year-old male with a primary complaint of groin pain. The onset of symptoms occurred while running with his son. The patient initially rested but sought physical therapy treatment because of continued symptoms. He was seen under a direct access license, which allows patients to seek some level of treatment from a licensed physical therapist without a prescription or referral from a physician.

His initial visit for therapy occurred three weeks after the onset of symptoms. He complained of right groin pain, occasional popping in his hip and sporadic low back pain.

His symptoms were aggravated by squatting, standing for more than one hour, pivoting to the left, walking up steps; he was unable to run or cut. He had not taken medication nor had he undergone an X-ray.

His goals were to return to pain-free activities of daily living and resume running with his son.

He presented with limited hip extension, hip internal rotation (IR), and lumbar mobility into flexion and extension. He had pain with resisted hip flexion and adduction and weakness with resisted IR. He demonstrated poor mechanics with balance and squatting.

Hip flexor stretching and manual hip mobilizations for IR were initiated, with minimal improvement during the first week of care. At this time, a trial of the McKenzie Method of Mechanical Diagnosis and Therapy was attempted. The patient experienced an immediate reduction in pain with muscle testing and improved range of motion (ROM) after performing repeated lumbar extensions in prone (lying on his stomach).

By visit five, the patient reported a significant reduction of pain and was able to walk four miles prior to the onset of symptoms. At visit 10, the patient had resumed running and other recreational activities. He noted occasional pain with extreme cutting that he was able to eliminate by performing lumbar spine extension in standing, often referred to as back bends.

He was discharged with a home exercise program (including exercises to further strengthen his gluteal and core muscles) and was educated on the importance of body mechanics during recreational activities.

The patient was a 48-year-old female recreational runner with complaints of right hip pain. Her symptoms began while running. Over the course of a week, she became progressively limited in her ability to run and complete activities of daily living.

After resting without benefit, her initial medical intervention included visiting her primary care physician two weeks after injury. An X-ray was negative for fracture, and she was given prescription nonsteroidal anti-inflammatory drugs.

The patient presented to physical therapy 12 weeks after the onset of her symptoms. She complained of right hip pain and intermittent symptoms radiating down her hamstring. She reported pain with dressing, sitting, steps, bending forward, and squatting as well as an inability to run without pain.

The patient demonstrated full hip mobility aside from a mild limitation in hip flexion, but she had significant restrictions in her lumbar spine mobility that reproduced her symptoms. A trial of hip mobilization did not lessen her pain. A McKenzie assessment was performed with an immediate reduction in pain after performing repeated lumbar extensions in prone (lying on her stomach).

McKenzie-based exercises for mobility and gluteal and core neuromuscular re-education exercises were completed. The patient advanced to functional and dynamic exercises, progressing to an interval running program.

At visit 16 (eight weeks after the initial evaluation; 20 weeks after initial onset of pain), the patient reported minimal hip pain with a gradual return to running but was not at her prior level. She demonstrated full hip mobility in all directions, improved lumbar mobility with a mild restriction into left side-bending, improved hip strength with slight weakness noted only with right hip abduction.

To address these impairments, she was seen for four more visits in the course of a month. At visit 20, the patient was discharged with full lumbar spine ROM, mild pain with glute maximum-strength testing, and continued mild limitations with running.

These cases highlight the importance and effectiveness of early referral to physical therapy. Both of these cases responded favorably to conservative therapy intervention. The greater improvement seen in Case 1 and minimal medical intervention demonstrates that early referral can benefit the patient with improved outcomes and reduce overall medical expenses.

Low back pain (LBP) is a common condition treated by physicians across the United States. It accounts for 2.5 to 3 percent of all office visits. Despite direct costs associated with health spending increasing to $85 billion nationally in 2005, a 65 percent jump since 1997, the prevalence of chronic, disabling LBP continues to rise.

Initial care for LBP typically is accessed through a primary care physician. Guidelines for the management of LBP vary widely but include medication, imaging and referrals to specialists including physical therapy.

Such variation in care can affect the overall cost and outcomes for individuals with LBP. The purpose of this study was to describe the relationship between timing and content of physical therapy and health care utilization and costs.

This retrospective study used data from primary care physicians who diagnosed LBP with a non-musculoskeletal source. Patients were pulled from a national database of employee-based health care insurance plans.

Patients were categorized by:

The study comprised 32,070 patients who used physical therapy within 90 days of a primary care visit for LBP pain. Physical therapy utilization in the overall sample was approximately 7 percent and highly variable based on geographic region.

It is increasingly evident that initial decisions after new episodes of LBP can affect outcomes and cost associated with care significantly.

“Primary care referral of patients with low back pain to physical therapy.” 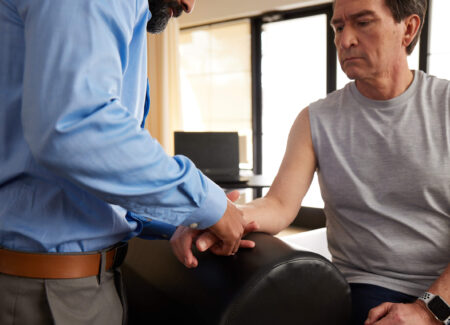